The Mind of a BJJ Black Belt: Jeff Humphrey 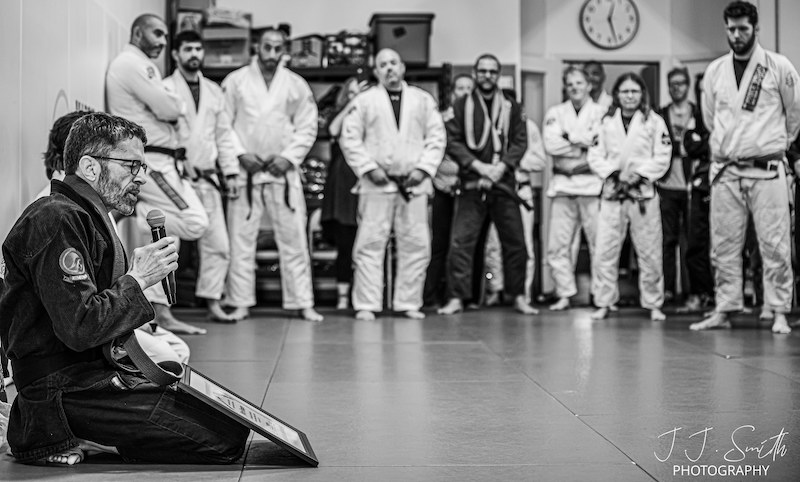 White belt Jeff Humphrey, 46, 145 pounds, was perplexed. He had obtained a copy of Saulo Ribiero’s Jiu-Jistsu University hoping to elucidate some of the game’s mysteries, but nothing about the book made sense.

In a way, solving high-stakes puzzles is what Jeff does for a living. Jeff is an M.D. who works as the chief development officer of a major pharmaceutical company. His work, and that of his team of researchers, has saved or improved countless lives. Jeff — now age 58, husband, and father of two grown children — is cerebral, conscientious, and deliberate: everything you’d expect from a clinician and a researcher. He used these qualities to untangle the complexity of Jiu Jitsu. It’s an approach that served him well, recently earning him his BJJ black belt after 12 years of training.

Creating his own language

The journey to black belt required Jeff to come up with an unconventional solution to understand Jiu Jitsu. To solve the puzzle, he opted to recreate the system, piece by piece, in his own words.

“What I really wanted to do was to turn it into shorthand,” he says. “I started to use medical terms like cephalad and caudad and ventral and posterior. And I started to really think about directions and how I would describe, for example, reaching across midline to another lapel. Well, that’s a lapel cross grip. And instead of cross, I would just put X-grip. And if I reached and grabbed the lapel on the same side, it’s a same-side lapel grip. So I’d just put SS-lapel grip.”

Jeff would absorb the details of a lesson, then translate them into this newly created language in notebooks and spreadsheets, charting the evolution of his game. He’s shared these notes with several students, and all have had the same reaction: It only makes sense to him. It’s his own Jiu Jitsu code, created by deliberate practice on and off the mat. Roll with him, listen to how he teaches or talks about the game, and it’s apparent how well this approach has served him.

As Jeff explains it, his Jiu Jitsu journey began with understanding the positions, their connections, and the myriad attack and defense options that add depth to the game. At first, his approach to Jiu Jitsu followed more scripted, patterned paths. But then something interesting began to happen.

“I think that half of the game, or more, is transitioning in an unscripted way between standard positions,” he says. “The choices of how to make those movements is best guided by basic principles and you can’t teach it in a drill — and it’s not just scrambling.”

Jiu Jitsu became, as Jeff describes, an innate knowledge. With enough repetition and deliberate practice, you do what you’re supposed to do before you know you’re doing it. This is what learning theorist Josh Waitzkin would describe as Form to Leave Form.

But it took time, pain, trial, and error to reach that point. Twelve year’s worth of it. As you might expect for a journey of that duration, there were hardships and setbacks, mostly in the form of injuries. Some even brought him close to quitting.

There were two knee injuries requiring arthroscopy. A herniated disc. Neurologic loss in a leg. An agonizing pinched nerve that required months of rehab. In many ways, he says, his profession prepared him for the adversity.

“Every drug that gets approved has died three or four times,” Jeff says. “Thomas Edison said, ‘Many of life’s failures are people who did not realize how close they were to success when they gave up.’ My profession has taught me that you have to fail a thousand times.”

But that’s only half of it, as Jeff sees it. The other half is loving the climb, failures and all.