The Mind of a BJJ Black Belt: Cindy Fink 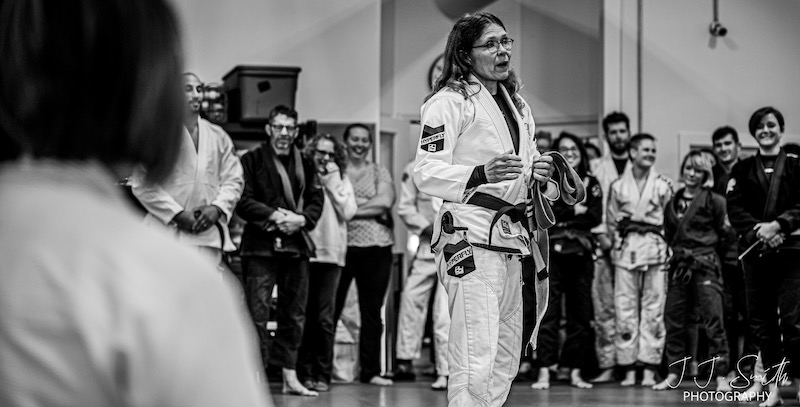 The first thing you notice is the unrelenting attack. Constant pressure. Ceaseless adjustments to the position. You’re out of options. Your limbs have been straightjacketed, your torso locked or twisted into an angle that renders it useless.

Only now do you realize that the end is near, though the endgame started much earlier. Often, there’s one option left. It’s usually the textbook thing you’re supposed to do: defend the choke, shrimp away, put your back to the mat. You do it, knowing it will all be over soon. This is checkmate, contrived by Cindy Fink, one of PBJJs newest black belts and the first female BJJ black belt to come out of the school.

Cindy is a fierce Masters 6 competitor, a retired chemist research scientist and chemistry teacher, an avid hiker and outdoor adventurer, Taekwondo black belt, mother of five, and the other half of a 31-year marriage. She’s also a change-maker, advocating for more competitive opportunities and equal prizes for women in Jiu Jitsu. Finally, Cindy is a leader, helping to lift up the next generation of grapplers coming through the ranks of the school. When she looks to all of the Jiu Jitsu that lies ahead, it’s perhaps this that interests her the most.

“I feel like I’ve gotten so much out of Jiu Jitsu and by the time you get to black belt, it’s time to sort of give back a little bit more,” she says. “My feeling is that a BJJ black belt should share and be a role model. I was very fortunate in that I had a lot of people helping me all along and if they didn’t, I might not have lasted.”

Cindy is a cornerstone of the PBJJ kids program as well as a recent addition to the adult teaching roster. She’s also recently launched a women’s BJJ program at a gym near her home. To see her at the front of the class is to watch a nurturing leader at work. But then there’s the other side of Cindy.

In competition, Cindy’s fighting spirit rises to the surface. She’s a determined adversary, wearing opponents down with unrelenting pressure and attacks, pushing them around the mat with takedown attempts, removing options in guard until all that’s left is the endgame and the tap. Laying it on the line is Cindy’s way of life.

She competed five times last year — a figure that’s likely to go up now that she has retired from teaching. And Cindy doesn’t think twice about fighting opponents who are younger or larger. The point is to fight.

“Last year I didn’t fight my true division at all the whole year. And I think the year before maybe once or twice,” she says. “That’s what I do. And I still want to do that. The goal is to keep competing.”

“I know now at this level, there’s fewer ladies. But I know where they are,” she says. “I try to compete near their home city and see if I can draw them out.”

There are no training camps for Cindy. Training camp happens year round. At age 58, she’s on the mats at least four days per week, lifts two days, and throws in a day of yoga for recovery. Once a week, she commutes into New York City to train at Marcelo Garcia’s academy in Manhattan. If there’s one thing you’ll never hear from Cindy, it’s an excuse.

The same relentlessness carries over into how Cindy advocates for change in the game of Jiu Jitsu. Whether it’s equity in prize payouts from major Jiu Jitsu tournaments, pushing to ensure that there’s always a women’s absolute masters division at IBJJF events, or bringing more women into the sport, Cindy is an advocate to the core.

But there’s something you won’t find in all that she fights for, and that’s her ego. For Cindy, it’s an honor to be PBJJ’s first female black belt, but she knows that she didn’t get to the rank alone.

To Cindy, it doesn’t matter. She’s ready to train, and she’s determined to find a way to shut down your game.

The Latest from the PBJJ Blog