The Mind of a BJJ Black Belt: Mike Pandolfini 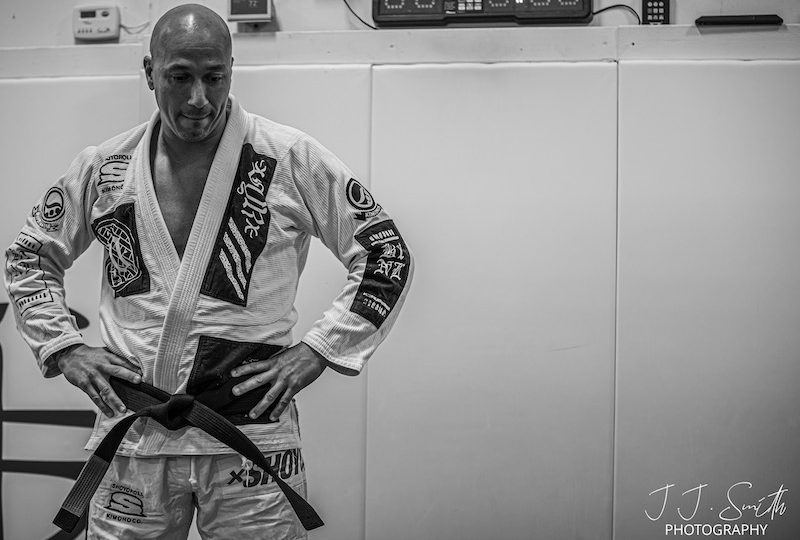 Spend any amount of time training with Mike Pandolfini, and you’re sure to hear this phrase: The martial arts journey. For Mike, and those he coaches, these aren’t buzz words. They’re a way of life. In the cage, on the mats, wearing boxing or MMA gloves, a gi, or a rash guard, Mike personifies this journey–one that recently brought him to his BJJ black belt.

In addition to being a BJJ black belt, Mike is a husband, father of two, a teacher at Trenton Central High School, a wrestling coach, kickboxing coach, jiu jitsu coach, and an accomplished fighter. He has a voice–and a presence to go along with it–that fills a room, that makes you stop and listen. His respect is well-earned. Mike is committed to the martial arts journey, every step of it, even those to come. He’ll tell you that he owes his life to it.

“Nothing really has changed,” he says of the black belt. “You get the black belt and it’s not like you go drink from this magic water fountain and all of a sudden all of jiu jitsu is downloaded. Everything’s exactly the same, just a different color of belt.”

For Mike, or Pando, as we call him, the martial arts journey continues.

Where the journey started

Pando’s martial arts journey encompasses all that he does, including his life off the mats. He owes everything to it, he says, painting a bleak picture of what could have been, and a story of redemption.

“I got a phone call from the FBI, buddy,” he tells me. “I was 17,18 years old. I was young and dumb, and doing stupid stuff. I was supposed to get locked up. I was going to jail, and I had to learn how to fight.”

Mike got another chance. What could have been a one-way trip through the criminal justice system became an opportunity to reinvent himself. This is where his martial journey began. I’ve heard what he says next before from others, but I know Mike means it.

Having been punched by Pando, I don’t know about the dead part. But I’ll take his word on ending up in jail. He explored the striking arts and eventually found his way to jiu jitsu.

“As I got into the martial arts lifestyle, it changed the way I was thinking,” he says. “It made me way more self-disciplined. It made me mentally stronger. It gave me something that I wanted to do in life.”

The martial arts journey ahead

For Pando, the journey is just beginning.

“I think the goal for me has always been don’t stop,” he says. “It is a lifestyle. It has to be part of you. If you’re not talking about it, if you’re not doing it, eventually it fades. So if you’re constantly on the mat or talking about jiu jitsu or martial arts, watching tape, then it becomes part of your lifestyle. You can’t leave it because it’s a part of you. Just don’t stop. Eventually you’re going to get to your goal.”

Pando continues to evolve as a fighter, most recently bringing the knowledge he’s acquired from coaching wrestling onto the jiu jitsu mats. In the four years I’ve trained at PBJJ, I’ve seen him coach nearly a dozen kickboxers, preparing them for their first amateur matches. I’ve watched a few repeat amateur fighters continue their development, one of whom is on the cusp of a potential professional career.

Pando is a selfless teacher. Recently, we had a lively roll on a Saturday afternoon. The next morning, he passes me on his way out of the gym, heading for another busy day of being a husband, father, and coach.

Pando is back on the mat, giving freely of himself, giving more to the martial arts journey. But now he’s doing it as a black belt.

Joe Hannan is a journalist, writer and consultant. You can find more of his work here and contact him here.