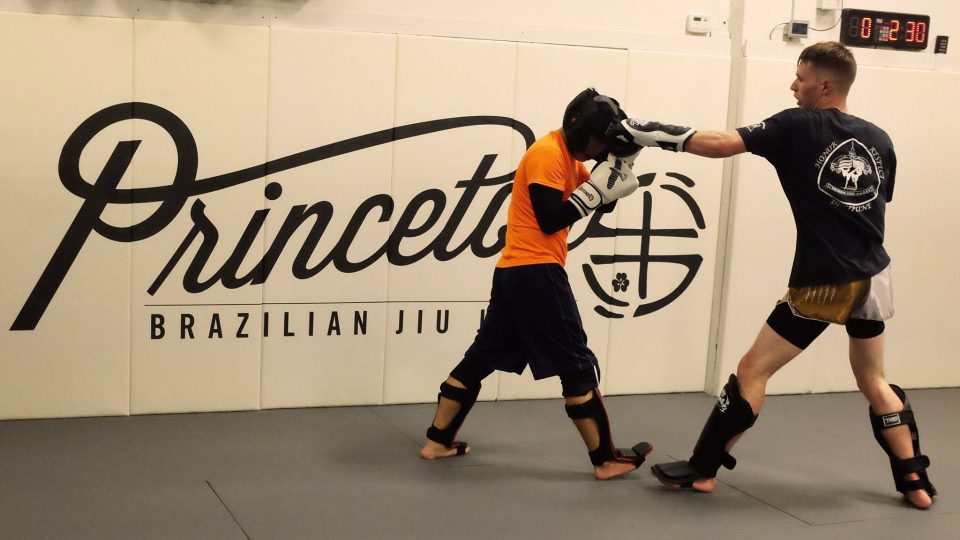 The people who train at Princeton Brazilian Jiu Jitsu are my violent family. I think fondly of them as they hyperextend my limbs, suffocate me in sweat-soaked fabric and bring me to the brink of unconsciousness from restricted blood flow. All families fight, we’re just much more up front about it.

I assure you that there’s nothing like a well-aimed blow to the head to bring you back into the inner world of your body.

It’s violence itself that brings us together. Talk about a paradox. While most people run from confrontation, we pay for it with our hard-earned dollars. Why? Community. Shared deprivation makes us a tribe. We come from all walks of life, but we all speak a brutally elegant language of chokes, joint locks and elaborate body movement.

Some of us also let our fists do the talking. For about a year-and-a-half, PBJJ has seen its Hybrid Kickboxing program swell in numbers. Most recently, a second cohort underwent around of rank testing.

Ranking in kickboxing is generally less complex thank jiu jitsu, and every school and discipline has its own way of doing things. In Hybrid, the color of your Thai shorts lets everyone know where you stand. Either you haven’t earned your shorts yet, or you’re wearing green, black or red. Those of us who wear green (myself included), know enough to be dangerous. Those wearing black know enough to teach us to be dangerous. Those wearing red, well, they make sparring sessions interesting. 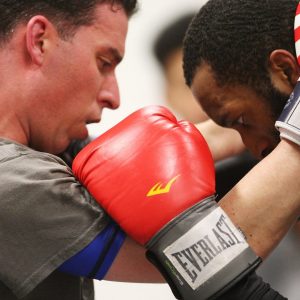 Earning your shorts is an ordeal. The second round of testing took place a few days prior, and in the days since, I’ve heard people say things like, “It’s like I wanted to quit, but I didn’t have the time or energy to even say I wanted to quit.” Or, “I’m glad I didn’t know what that was going to be like.” Both of these things were said with a smile and a laugh. To be clear, nothing anybody is required to do for testing is unduly unsafe or something the coaches or other students haven’t already done. But it isn’t a walk in the park, either. It’s up there among the most physically difficult things I’ve had to do.

We don’t have too many rites of passage anymore. Science has wiped away the gauzy veil of mysticism that shrouded much of human existence. Understanding of the material world to some degree has deprioritized the inner, spiritual world. I assure you that there’s nothing like a well-aimed blow to the head to bring you back into the inner world of your body.

The Hybrid shorts rite of passage is a mindfulness exercise in motion. It makes stronger individuals and consequently, a stronger tribe. Each of us who has gone through it has a common experience to draw from. Each new initiate is seen in a new light after completing their ordeal. The Hybrid program becomes that much better.

It’s easier than ever to live a comfortable life. You can live and work without ever leaving your house. It’s not so surprising that rates of depression and suicide are higher than ever. We’re more isolated than ever. People are hardwired to be around other people. Maybe a rite of passage is just what you need. Maybe it’s time for you to join the violent family.

Joe Hannan is a journalist and writer. You can find more of his work here.