Why did you start BJJ?

I was a Bruce Lee fanatic. I always loved martial arts growing up; however, I played 3 seasons of sports so I never had the time. My senior year of high school after basketball season was over I decided to pursue Martial Arts. I did not know where to begin, so I opened the Yellow Pages and saw “Shaolin Kung Fu”. At this time the rap group Wu Tang Clan was a big hit so I thought that this was destined to be the place (lol).

After 6 months of training there, I was allowed to “spar.” I couldn’t wait to try my skills out. It was then that I knew that Shaolin Kung Fu was not the sport for me. I needed some other martial art, but had no idea what it was. I enjoyed watching UFC at this time, but did not really know any schools in the area teaching “UFC.” It’s now 1999 and I began playing basketball in college and somewhere in the middle of the season I was in the weight room wearing the Shaolin Kung Fu shirt. I was approached by a stranger who said “Yo you train at that place?” I told the person no, explained my reasons why, and he asked me to come into the hallway to show me something called Jeet Kune Do.

I was immediately in love. He told me to meet him at a random address at 7pm on a Tuesday, which was when they trained. When I pulled up to the address, I saw it was a Chinese restaurant. I saw my friend, and he told me to walk around the back of the building. The class was being held above the restaurant. When I got to the 10x 10 room, which smelled like a mixture of sweat and fried Chinese food, I saw about 10 guys swinging plastic knives, rattan sticks, punching each other in the face, bleeding on each other, and doing what looked like wrestling to me at the time. I was a little skeptical at first, but the excitement of learning a functional martial art kept me on my path.

I trained with this group of about 12-15 guys for about 5 years almost daily for about 2 hours a day, and I got certified in JKD as in instructor under Paul Myatovich, who was my first true martial arts instructor and the person who put me on my martial arts path. At this time (2000-2001), the group of guys we were training with was asked to train the 82nd Airborne Rangers at Fort Bragg in hand-to-hand combat and weapon retention. Little did we know that the crew they asked to train the Rangers at this time (Forrest Griffin, Adam and Rory Singer, Paul Myatovich, Ross Geller, Jim Cohen, Aaron Little and myself) would become some of the most influential coaches and athletes in the martial arts world. Things were going great, and I loved it. It was around 2001-2002 that the group of guys I was training with would get more in depth with submission grappling and the mixed martial arts scene. We left more of the military self-defense JKD side of knife, stick, firearms and hand to hand combat training/coaching and began moving into the MMA world.

Fast forward to 2009-2010 this is when I started GI BJJ. At this time I was teaching and training predominantly boxing, muay thai, kickboxing, submission grappling and MMA. One of my friends suggested that we “try this pajama thing.” The pajama thing was BJJ. See at this time most of my competitions were in the combat sports listed earlier. I wasn’t into gi BJJ, because to me it looked slower, and most of the guys I saw training this through my journey did it more for a rest day when they were banged up from hard sparring days in MMA. Well, boy was I wrong.

I could go on to write a book for the amount of time I have spent dedicated to the martial arts world over the past 18 years of my life and the number of world class instructors I have had the pleasure to meet and train with along my journey as well as the number of lasting friendships and memories that I have due to martial arts. I have had the pleasure to learn and train with some legendary coaches over the years such as Paul Myatovich, Ross Geller, Adam and Rory Singer, Dan Inosonato, Coban Lookchaomaesaitong, Arnulfo “Dong” Cuesta, Emily Kwok, Art Keintz, Marcelo Garcia, Roberto “Cyborg” Abreu, Rick Tucci, Ryan Hall, the Mendes brothers, Barry and Sammy Goss, Jared Weiner, Justin Greskiewicz, Brad Daddis, Matt Thornton, Ajarn Chai Sirisute, Wilson Reis, Forest Griffin, Carmelo Marrero, Herman Suwanda, Pat Miletich and many more. Some of the arts I have had the pleasure to study are Shaolin kung fu, JKD, Filipino martial arts (arnis, eskrima, kali), silat, savate, Western boxing, Kickboxing, Muay Thai boxing, submission grappling, wing chun, wrestling, judo, BJJ and MMA.

1998, though I would say that my true submission grappling game began around 2002.

What are the 3 most important things BJJ has taught you?

What do you enjoy about teaching?

I love to teach because I think that to truly know something you must first be able to perform at a certain level as well as be able to teach the majority of the people who want to learn. If you cannot teach something that you know to someone else your wealth of knowledge dies with you, which in return is not fair to you, the students, and the art. I believe that real teaching is hard. Anyone can show you a technique, but to actually teach and explain why and how and when to apply the technique takes experience. You must be able to see how your students learn.

From there you must strategize for your students, teach with variation and become so comfortable and familiar with the technique you are teaching that you can teach with change and variation at the drop of a dime. It forces the teacher to become a student daily. If you do not know what you are teaching you will be exposed quickly with a simple question. Does this mean the teacher knows everything? Of course not, but a true teacher will continuously research, practice and have put themselves in as many situations for that technique as possible before teaching it so that he can answer as best as possible any questions that do come up and always try to stay at least a few steps ahead of his or her students.

What is your outside profession?

I am a teacher. I teach sports medicine and athletic training, driver’s education, health, and physical education. I am also a CrossFit Level 2 instructor, the boys’ high school varsity soccer coach, and the strength and conditioning coach for the high school.

Goals for the future?

I have several goals tied to martial arts. I am a BJJ brown belt, so my ultimate goal is to one day become a BJJ black belt. Another is to be able to travel the world and train martial arts. Lastly, I want to continue to learn as much about each martial art as I can on my martial journey and continue to pass on the knowledge through teaching.

Finish this sentence: If I knew then what I know now about BJJ, I would…

…have started gi BJJ at the same time I started martial arts. I would have trained more consistently when I was younger, since it only gets harder to manage time as you get older. Lastly what you need to understand about BJJ is that it’s an on-going infinitely changing and ultimately un-finish-able art. BJJ is infinite, no one can master BJJ, there are so many moves, variations, counters, timing issues, strategies, and then there’s sport vs. self-defense. BJJ has its own beauty that you can only hold onto for as long as you train. Once you stop, whether it’s a week, month, year or several years, you come to realize that it’s harder to get back into because the BJJ that you have come to know during your time training has evolved into a bigger machine than just a few months before, and now you need to train twice as much and as hard just to try to catch up with where you left off. So if I knew then what I know now about BJJ it would be to start as early as possible and stay as consistent as possible.

If you could meet anyone in the world/history, who would it be and what would you ask them?

I would have loved to speak with a number of people. Here are three that are on my list: Bruce Lee, Sun Tzu, Katō Kiyomasa. To be honest, I’m not sure exactly what I would ask, however I find these men so intellectually fascinating, and in tune with the universe and themselves as well as being beyond their time I would have loved to just talk about different aspects of life, philosophies and training.

What is your favorite candy/bar and why?

I would say it would probably have to be between Hershey’s Almond Bar and Mr. Goodbar. However I much rather have pizza. I eat pizza 6 out of 7 days a week even if it’s just one slice. It’s my kryptonite!!

What other information would you like people to know about you?

I consider myself to be a martial artist. There are some people that are basketball players, or boxers, or Judokas. I believe in being a martial artist. I am 36 years old and I began my journey at the age of 18. I have studied multiple arts and continue to study as many arts as possible. I have been dedicated to the martial journey for half of my life and will continue on my path for the rest of my life. I believe in exercise science and the human body. 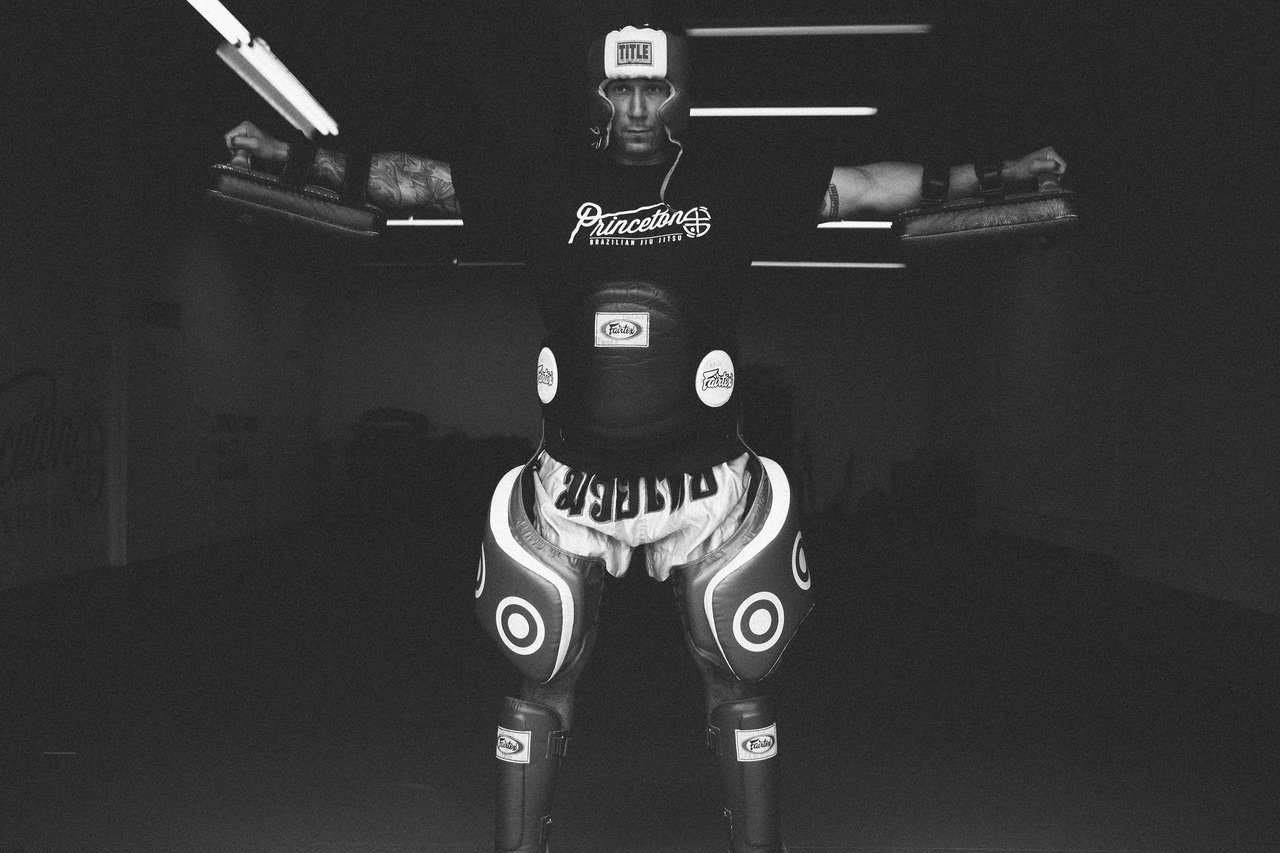